Somehow there’s a disconnect between my writing expectations in math and what’s being turned in. For the subtracting integers portfolio which I’ve written about here and here I provided ample time, included both the criteria for success and rubric, plus discussed the reflection in class on multiple occasions. Either I’m not making my expectations clear or my students are not used to doing reflective writing that includes an analysis. I’m guessing it’s both so I created a graphic organizer to help them be more reflective and analytical.

First of all here’s the rubric the students are using:

And here’s an example that would benefit from a graphic organizer:

“In my portfolio I use multiple strategies. For the first thing we had to We had to use visual models you things certain ways to solve it. Such as -x -y or x-(-y). Then we had to use five positive numbers and negative to do this I first made a bunch of positive and negitive fives and just put it together and solve it and then I just made of a problem of -20+ positive 25 equals five.”

The student below is beginning to meet my expectations, though a revision using a graphic organizer will help provide specific evidence that’s currently missing.

“I can solve problems without giving up. What I used to help me was examples from the past worksheets that we did a while ago. … I can use math tools and explain what I use them. I used a number line as a math tool and I use this to show in understand my work. Kind of like a visual for me. I can work carefully and check my work.  I work carefully keeping my work organize and neat. I also check my work by doing the opposite of the problem and see if it kind of matches. It’s hard to explain…”

This Written reflection subtracting integers graphic organizer isn’t perfect, but I think it will help.  I’ve clarified and provided some examples of insightful analysis:

Using the graphic organizer, students now have a work space to brainstorm which of the eight math practices were utilized and how.

On Monday, I’ll share student work samples and ask the students to both critique and evaluate the reflections based on the rubric and graphic organizer.

I’ll update and report progress in my next post.

A couple of weeks ago I wrote a piece about student portfolios, specifically a subtracting integers portfolio my students were about to create. Their media of choice is Explain Everything. Now that the projects are trickling in I’m discovering conceptual errors which I might have overlooked on a traditional paper-pencil assessment. Here’s an example:

While the screenshot does capture the number line error when subtracting a positive number, I’m drawn to the student’s voice and explanation, “Since 2 is negative I move to the right.” The portfolio is no longer a thing to grade, there’s a human being behind that work and I can see and hear her. Her portfolio submission has instead become a formative assessment.

This next problem demonstrates further confusion. Here 2 is negative, but she moves to the left.

The student below, on the other hand, has mastered subtracting integers. She begins by demonstrating the number line movements, explains why she moved to the right, then proceeds to show its equivalence by adding the opposite.

When solving this equation the student admitted to a lot of guess and check, however I’m not bothered by the extra practice she got from doing the problem. 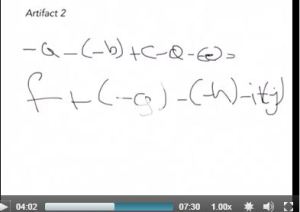 After introducing this slide she explained how she turned it into an addition problem by adding the opposite. 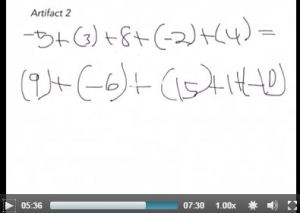 So far my favorite student created real world problem is: 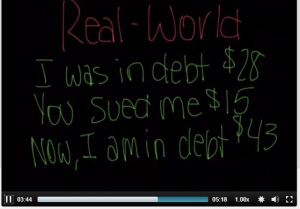 Only three projects have been submitted thus far, but I’m anticipating most of my time will be spent giving feedback rather than issuing grades. I don’t feel comfortable grading something that’s a work in progress. In terms of time, the portfolios run between 6 and 7 minutes each. I really need to front load the time now so it will be easier later when the students apply the integer rules to negative fractions and decimals.

Here’s another project I looked at this morning. How much conceptual understanding does this student have? He provides no explanation and relies on adding the opposite to demonstrate the number line. Also, he only provided a screenshot of the equivalence problem with no explanation of how it was solved.