The math committee met today to continue our work creating local assessments. During our learning time we walked through 6 sample PARCC assessment items. Note: The math questions come after the ELA so keep hitting the right arrow until you get to the grade 6-8 math questions.

If one of your classes has been chosen to pilot the assessment, be sure your students play with it. When PARCC suggests students get used to the scrolling and buttons they mean it. I was using a 15 inch laptop and had to scroll.

But the real focus is on the assessment itself. For the past year and a half we’ve been designing local assessments with the common core in mind, but today’s preview of actual sample problems was an eye opener. Turns out we’ll need to revise some of our current assessments to address the performance requirements. 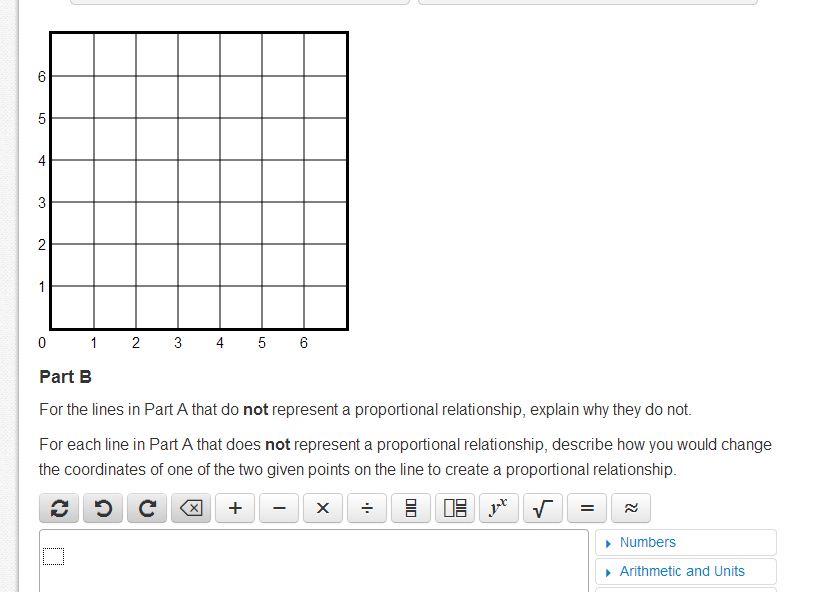 Instead of going back and revising some our previous local assessments we thought it would make more sense to begin applying what we now know to the next unit of study–inequalities.

Our students need to be exposed to multiple choice problems with multiple constructed responses. We spent a good twenty minutes on this problem and we’re still not satisfied with the wordsmithing. It may be better framed as Part A and B instead of problem 5 and 6. Anyway, here it is:

I’m beginning to second guess myself with some of these problems. We do a form of standards based grading. Is #13, in the image below, really a level 4? I’m now thinking it should be a level 3. And problem #14, is it too much of a reach to expect a 7th grader to write this inequality? 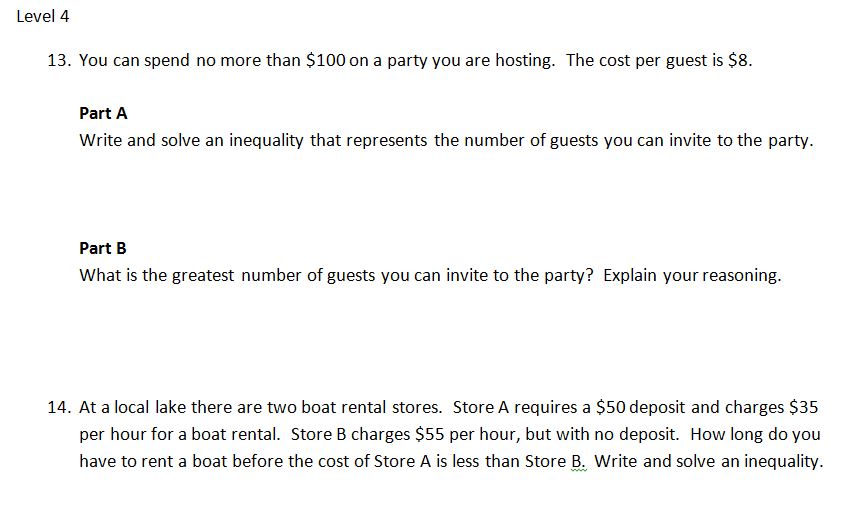 I’m looking for help. Please comment, point me to good assessment questions, or to bloggers who write about  assessment design.

My slightly modified version of this Teaching Channel lesson on the Pythagorean Theorem started a bit slow but within 10 minutes it gained incredible momentum. By the end of the lesson students were set free to search the hallway for problems and gather anagram clues to solve a Who Done It.

At first the kids didn’t want to play with the numbers. I wasn’t about to lose at this waiting game so I announced, “Let’s push the pencil and those calculator keys.” One pair began working, then another, then another. Soon the entire class was engaged.

A few minutes went by and one boy asked, “Can the numbers be used more than once?”

We had a great discussion on the operations needed to get 10. Not one mention of a formula.

I then asked, “How could we apply what we just learned to golf. How far would I need to hit my tee shot if I wanted to get a hole in one?”

It’s at this point where I tweaked the lesson to my personality. Sidebar: I love the Muppets!

Here is where the knowing the vocab came in handy. After pointing out the legs and hypotenuse, students then realized they would need to do something different to solve Question 3.

They practiced solving these: 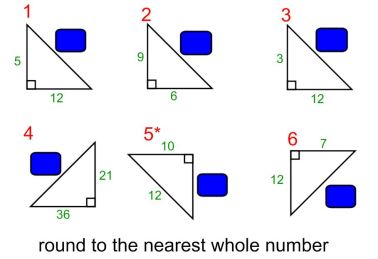 Then it was time to set them free. The students got this handout.

The first two problems were done in class, but the other three created a mini scavenger hunt in the hallway. After correctly solving problems #3-5, each pair received a Who Done It clue. In the Teaching Channel lesson students received their clues in a text message. I chose human interaction because I prefer it.

Here are the anagram clues.

I experimented with the math workshop model earlier this week. The elements I focused on really made the learning effective. The elements I didn’t focus on ended up being missed opportunities.

Here’s a walk through on the topic of Writing Expressions and Equations.

I think I did OK on this.

Students started class by completing this tiered problem. Nearly every student was able to complete problem 1. Though I’ll talk about that one in more detail in a bit. Problems 2-4 were increasingly “challenging”.

I think I did OK on this, too.

The mini-lesson wasn’t a distinct lecture. It was a series based on “My Favorite No.” Students took a risk by putting their work under the document camera and we analyzed their thinking. One struggling student took a risk and showed his work for problem #1. He wrote n + 5 = 15.

“What words triggered you to write ‘equals 15’?” I asked.

“Do you want to reconsider and erase the 15?”

While this student is a young man of a few words, I do appreciate his risk taking.

Each of the four problems and the”Favorite No” was woven into the mini lesson. When we approached problems 3 and 4  the mini-lesson turned into direct instruction. The use of coefficients with a variable instead of the multiplication symbol and using fraction bars to represent division were new concepts.

I forgot to create an anchor chart with a list of words that are similar to: sum, difference, product, and quotient. That would have been helpful when the students worked on the following:

Students were paired to cut up and complete this puzzle. It was an excellent task. Students had to read and process many written expressions and try to match them by moving the squares around. They talked math and they collaborated. What I really liked about the task was that it proved students could be engaged in a problem that had nothing to do with the real world.

As they worked I conferred with each pair about three times over the course of the period before time ran out.

Students didn’t finish the puzzle so they taped what they had completed and we’ll finish up next week. That’s when I’ll recover from my anchor chart faux pas (or was it a fax pas, now I’m thinking this sequence is better). I’ll also want them to reflect on any strategies they used while completing the puzzle.

Was I a bad teacher today? I made my students partner read three textbook pages on identifying constants, coefficients, and like terms. After reading they were to complete six practice problems as a check for understanding. I wanted them to be successful, so I posted a table to make it easier to compare and discuss each problem.

They were stumped with the first one.

I expected the students would run into trouble. They say they read, but they don’t read closely. Most rush which doesn’t help them develop an eye for the nuances—like in language arts where over time your eye becomes trained to catch missing words, sentence fragments, or a lack of support in a paragraph.

Here’s a screenshot of a section they read.

And here are the problems they were asked to complete. By the way the problems were located on the facing page, not very far away from the example.

As soon as I realized they were stuck on the first problem I gathered the class and asked, “What are the coefficients in problem one?”

“Look at the example. How can that help you?”

I recognized they needed the textbook under the document camera, so I projected the worked example onto the screen. Here it is again.

“What are the coefficients in this expression?”

“Great question!” We hadn’t talked about how 1 is understood so we discussed that. However it was a missed opportunity on my part to ask if the student had asked himself that question when he first read the worked example. The train was now slowly leaving of the station. They were beginning to use their resource–the worked example–to help them identify the constants, coefficients, and like terms.

The second problem required students to apply integer rules. Most wanted to identify the coefficient as 9 instead of -9, same with the constant -6. They still haven’t developed the eye to recognize subtraction as adding a negative.

For homework they’re to complete the other four problems. Tomorrow will be more in class practice and I’ll assign this practice video for homework.

If you haven’t visited James Tanton’s G-Day Math website stop reading and go there now! I’ve spent the last hour or so mesmerized by his Exploding Dots videos. His visual representation of  base machines, leads to a visual understanding of long division, polynomial division, and more. 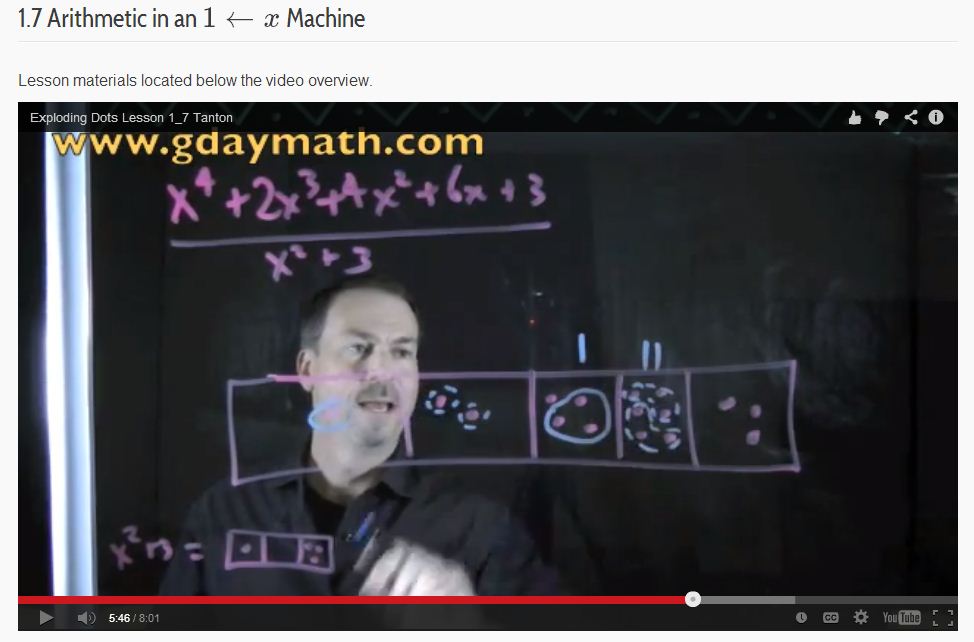