This week was our monthly curriculum writing committee meeting. We were sharing our successes and challenges regarding the Common Core and I mentioned, “I don’t want to sound dramatic, but I hunger for creativity. I want my students to create.” I am truly afraid the kids will lose interest in math if I don’t give them opportunities to use their imagination.

Jennie Winters, our Lake County ROE math/science coordinator, replied that according to PARCC performance tasks using creativity are one of the highest levels of performance indicators.

So why have I limited my students’ creativity? Everyone knows how satisfying the creative process is. Look at Crystal Kirch and other teachers who express their creativity through their flipped classroom videos. Look at Dan Meyer and how he combines his interest in graphic design and filmmaking to create Three-Act Math, 101 questions and now Graphing Stories .

If imagination is the single most important competitive advantage we can have today, (Thomas Friedman, Grinnell College 2009 commencement address) I should be fostering it in math. He says (5:40 mark), “Creativity typically occurs when people who master two or more quite different fields use the framework of one to think afresh about the other.”

With that in mind, is it worthwhile to examine ways to demonstrate math mastery by combining it with a very different field the student has mastered such as art, music, language arts, social studies, etc?

I’ve been giving this some serious thought of late and have been trying to develop a few of “projects”.

A couple of weeks ago I read the Lorax to my sixth graders. In groups they completed two ratio and unit rate activities related to the story. The lesson was from a recent issue of Mathematics Teaching in the Middle School. On the fly, I decided to make a mini-project out of it. “Choose problem 5 or 6 and turn it into a poster to show me your understanding of ratios and unit rates based on the story.”

Problem 5 read: Suppose the Once-ler cuts down 4 trees every 15 minutes using the Super-Axe-Hacker.

Problem 6: Three Truffula Trees can be made into 12 Thneeds.

The energy level in class blew the acoustical tiles off the ceiling. Here’s what the groups produced. As you can see some groups included more “math” than others. Granted I didn’t have a rubric and it was “just for fun”, but with some tweaking I think it could a performance assessment. At a minimum it’s a creative outlet for students. 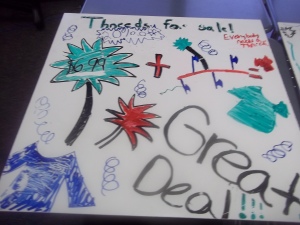 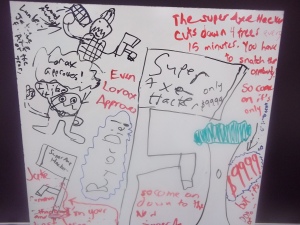 If I explore this further, the key will be for students to select their “mode of representation”. I had many students whose strength is art. As a result they were able to take the framework of one to think afresh about the other.

A project that was less successful was one where I had students create videos demonstrating mastery of a decimal multiplication word problem by having a baby, toddler, or dog solve it. The idea was to parody an E-trade commercial, using cuts, split screen, or other editing techniques to show the problem while the “talent” solves it. I was expecting more than what the students were able to deliver because 1) most were not experienced filmmakers, and 2) I didn’t have an exemplar to show them. Only one group produced a video that met the criteria. If I do this next time, now I have an example.

One project I am most proud of is “Blowin in the Wind”, yet it needs more student creativity,

In 2010 I was fortunate to have been selected as a Siemens STEM Fellow. Fellow STEMmer Kelly Frederick’s class and mine collaborated across several time zones to study wind power. I received a grant to purchase a KidWind turbine kits and the students studied surface area of various blades and blade pitch to generate electricity. They designed their own blades and tested them to see which groups performed the best. The kids Skyped and used Edmodo to share their research.

I’ve been doing it ever since. I was worried I’d have to give it up with the new 6th grade common core curriculum, but the project fits like a glove. What I would like to do is bring in a more creative component.

What would you recommend?